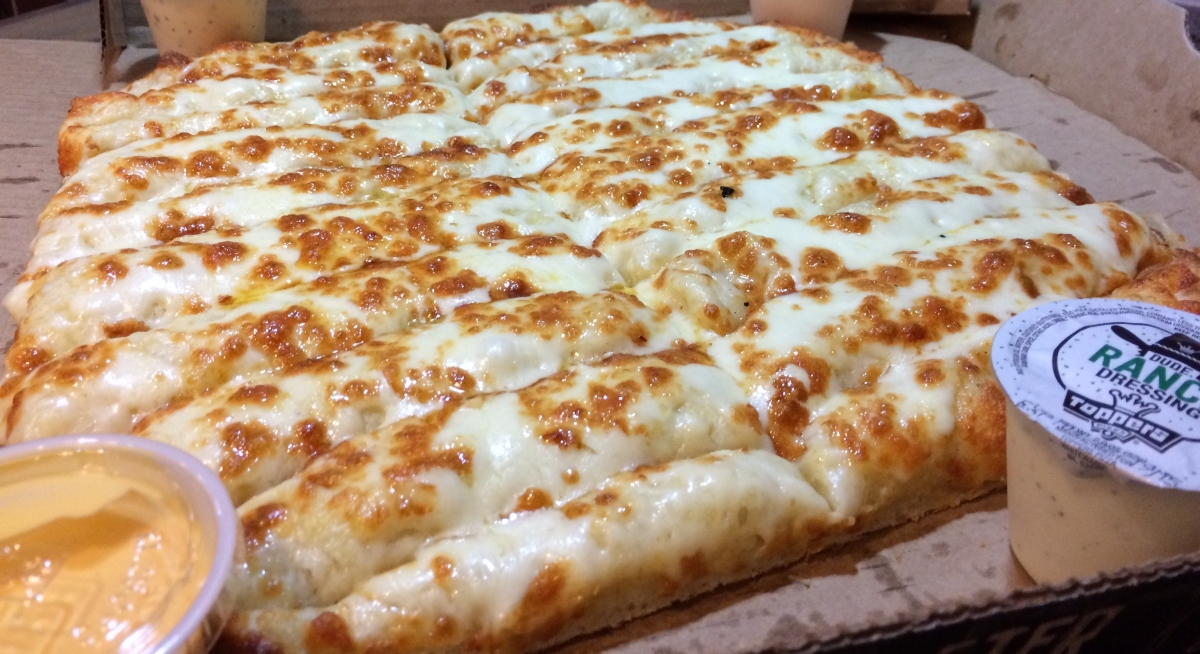 Can a pizza place capture our hearts with a menu item that isn’t even “pizza”?  Those who’ve ordered pizza after midnight in any Wisconsin college town would have to adamantly give a big “hell yes”.

With the new year here I feel like I need to switch it up from same old tomato sauce, cheese, and pepperoni. So, I’m opting for a slightly different option from one of my all-time favorite places, where you not only get great pizza, but you also get pizza’s garlicky, ooey gooey, extra cheesy, stick-shaped half-brother.

Toppers Pizza could be personified as punk rock, as they playfully push boundaries with their menu and loudly vocalize their vendetta against the system (in their case Dominos Pizza; recently unleashing an ad campaign calling out Dominos lack of product quality that ended up in a lawsuit).

They use menu creativity, quality, and marketing charisma to forge a competitive edge against the big boys and of course, they are open later than anybody else so it’s naturally the pizza of choice for party people and real-life punk rockers.

The Sticks are Stacking Up.

With Toppers rapidly climbing the ranks of the chains and expanding franchises across the U.S. it’s fun to remember that behind the wheel of their accelerated growth sit their legendary Topperstix.

The famously decadent fusion of pizza and cheesy garlic bread known as Topperstix are a dippers dream come true—smothered in cheese, sprinkled with toppings if you wish and served with a variety of dipping sauces like ranch, nacho cheese, and garlic butter.  The combinations are so crave-worthy that midweek daydreams of them often send me reaching for the ranch bottle.

They aren’t the only cheesy breadsticks on the block, but they definitely own the block.

With Toppers headquartered in Whitewater WI. I’ve had the privilege of eating Topperstix my whole life.  Triple orders fed grade school sleepovers, provided afternoon snacks in high school and were a prized nightcap in college.

Before there were Baconstix and Nachostix, I remember the first time I ever tried a triple order and thinking Why on earth doesn’t every pizza place have this!?  Back then cheesy breadsticks to that caliber were not a menu norm, I haven’t done the research but I feel Toppers was a pioneer in the cheese stick revolution.

Topperstix aren’t the only menu item that makes them a leader in pizza innovation either.

They’ve got some off the wall house pizza combos as well.  My personal favorites include Buffalo Chicken Mac and Cheese Topper, Old School Sausage and Pepperoni and my own spin on the Meat Topper in which I sub a BBB/pizza sauce mix for the standard pizza base sauce—it’s rich, smokey, savory and sweet, amazing.

Toppers Pizza inspires me not only because they blazed the trail for cheesy breadsticks and their house pizzas are as alternative as 102.1, but because they embody their slogan Never Settle.

They always have new menu items in development, riffs on classics and tweaks to their sauces for the stix and that’s what makes them fun.  Regardless if you agree or disagree with their rapid menu changes you have to respect their ambition to continually improve.

Every Friday I order pizza, so it’s nice to shake things up a bit with some Topperstix that have all the greatness of pizza but are not exactly pizza.  Never Settle is a good mantra for 2019 as when we are too attached to a particular view or way of doing things life gets stagnant.  Luckily there are places like Toppers that not only welcome pizza innovation but make it incredibly delicious.

What I’m eating: Toppers: Triple order original stix with extra cheese and Meat Topper with BBQ/pizza sauce mix as the base (referred to as MATAS by the OG’s)

What I’m reading:  Sam Walton: Made in America –Sam Walton 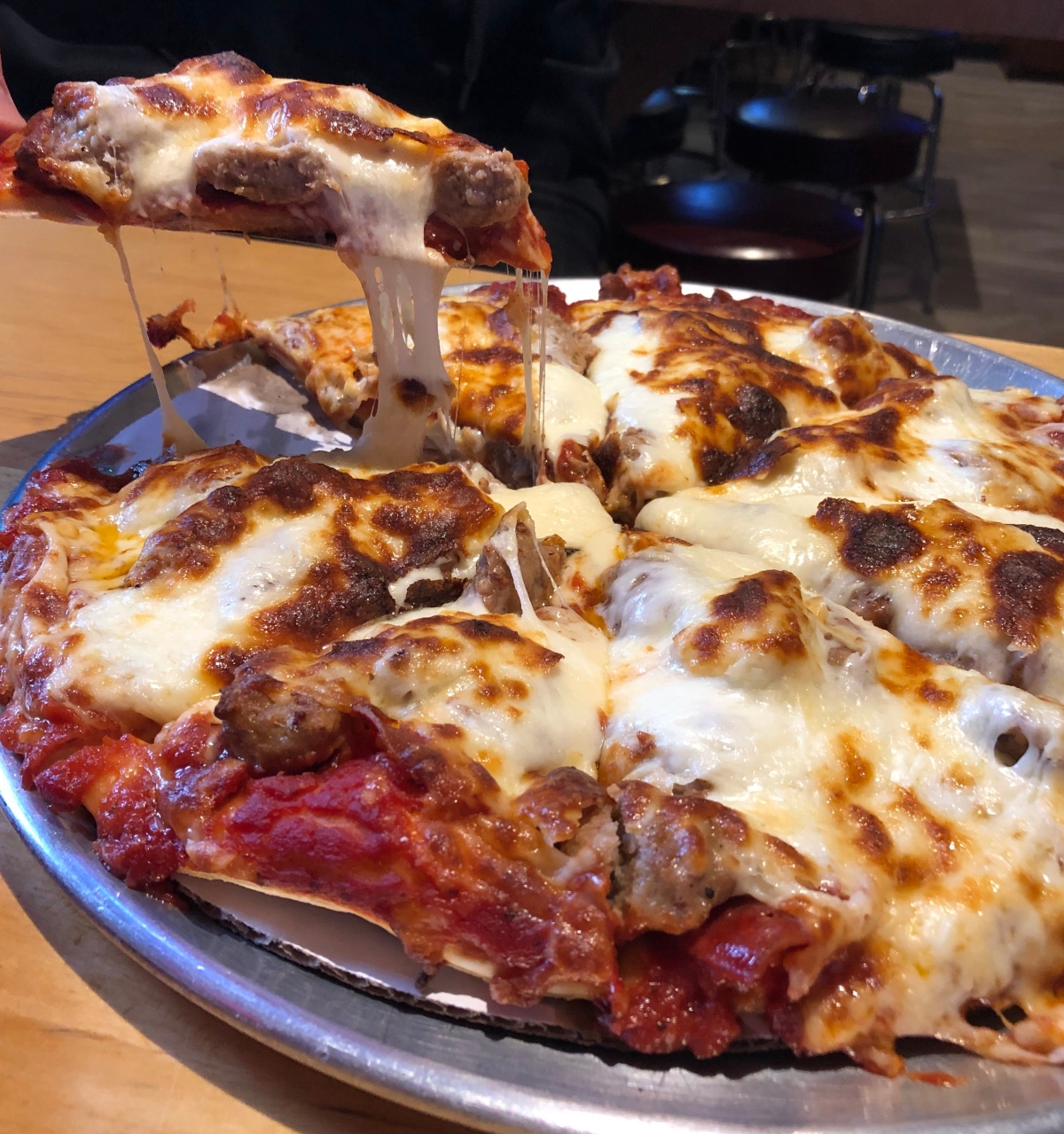 Since writing my 2018 pizza-eating goal list last January there’s a pizza spot that has continuously tempted me but always got put on the backburner.  Maybe it was the 20-minute drive into the middle of nowhere it would take to get there or the fact that impromptu pizza pilgrimages weren’t as easy with a newborn on board; either way after a full year of procrastination, countless recommendations and consistent reminders from friends and colleagues I finally took a scenic drive for the most highly prized pizza in the Dane County area.

Bar pizza on another level.

Mount Vernon like many itsy bitsy rural unincorporated Wisconsin communities comes equipped with a church and a bar.  In Wisconsin when most think of bar pizza, they think of an Emil’s frozen or some Portesi Cheese Fries tossed in a little metal pizza oven next to some Green-Apple Pucker bottles.  Mount Vernon’s watering hole, on the other hand, holds an epically magical homemade pizza that has put them on the map. 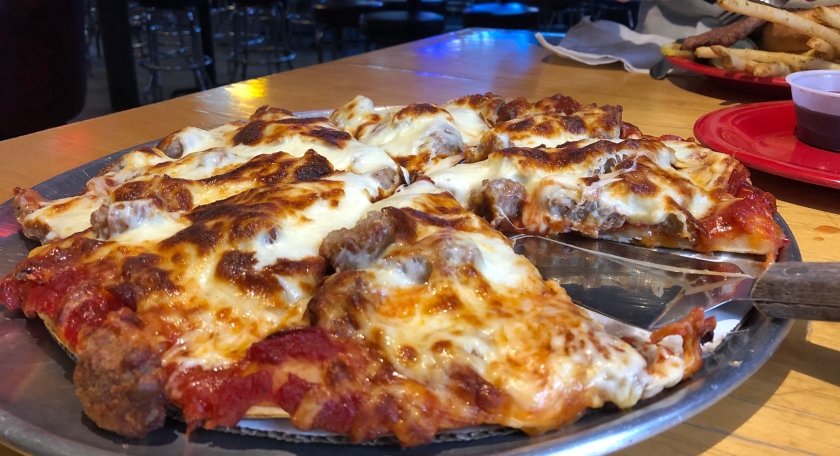 Marcines Bar & Grill has people flocking from all over southcentral Wisconsin for good reason; an inch thick layer of exceptional toppings on a crust that’s as tiny as the town.  I didn’t know what “excessive toppings” meant until I tried Marcines.

It’s like the cook was double-dog-dared into fitting a 20-inch pizza’s worth of toppings on to a 12-inch crust and just nailed it. They offer thin and thick crust—both require a fork and knife as either option basically just provides a vessel in which to shuffle gobs of melted mozzarella, over-sized sausages, and pepperonis into your mouth.

The quote of the day: “Look this bite doesn’t even have any crust, and I’m ok with it.” -Tess 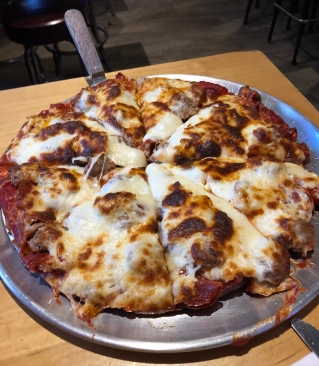 Everything from the sauce to the sausage is seasoned extremely well.  The sauce has a deep tomatoey depth of flavor and is not at all what I would expect from bar pizza.  They use really good cheese too, it’s stretchy and wraps itself around everything. Gazing upon a cooled slice you can marvel at the cheese woven through the toppings like the boroughs of an ant farm.

The sausages are so large they look like meatballs and are balanced between a subtle sweetness of fennel and salty pork.  They are hearty yet tender— with a nice texture that’s not too fatty.  They were so delicious even no-sausage-on-pizza purists conformed. Tess, for example, doesn’t usually go for sausage on pizza, but she couldn’t resist Marcines and said it was actually one of her favorite parts of the meal.

Getting our pepperonis in a row.

New Years is a great time to take stock, tie up loose ends and do a little self-assessment.  As I began to reflect on my 2018 I realized that I had a major box to check off my pizza goal list and I couldn’t stand the idea of heading into the New Year not having tried the #1 pick from last year.

It’s not easy finishing what we start as life pulls us in as many different directions as Marcines mozzarella does, but there is a profound joy that comes from seeing a plan through.  Over the years I’ve often started to enjoy the simple pleasure I get when completing a task more than the tangible benefit the task itself brings.

It’s better late than never. Whether it’s a New Years goal, resolution or just eating some anticipated pizza, the feeling of seeing our commitments through can often be the most rewarding part of any experience.

What I’m reading:  Made to Stick: Why Some Ideas Survive and Others Die -Chip Heath and Dan Heath

Follow The Pie of My Life on WordPress.com
Join 567 other followers